"Summer Solstice 2008"
in the tradition of Ancient Nature Religion 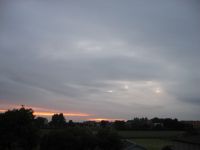 Who would have guessed, dawn at 05:40, that there was a beautiful and warm evening on the horizon. The weather gods smiled upon all invited souls of the Summer Solstice celebration and gave them as gift a dry and warm evening. When everybody had already left home, we could still enjoy a temperature of 17 degrees.

First, some food for thought... . The Koron, you all have received, at the Summer Solstice, to wear around your neck, where all made by me. From one and the same pack of clay, they where all treated with the same oxides. All where baked together at 1,250 degrees in the same kiln and became Stoneware-ceramic. Yet, they all are different.... .
The name Koron was given, because all the symbolism around and in the Koron revolve around Middle-Earth ----Tolkien ---- Lord of the Ring. Koron is Elfish, the language of Middle-Earth.
Cherish your Koron, let him be your friend, your talisman. He can be part of, or the medium, during meditations for Mother Earth.
Merry meet, Merry part, Merry meet again.
Brightest Blessings

In Anglo-Saxon tradition and among modern followers of Nature Religions, the day of Solstice, June 21st, is celebrated. For the third time, Miriam Maes organized past Saturday a Summer Solstice celebration in her garden. Three years ago, it all started with about 60 people and Saturday they already reached 150. "With this festivity, in the tradition of Ancient Nature Religion, we want to carry out a message of love for Nature and all animals. We feel respect for all living things. People of all ages, young and old, are present here. All people who feel called to work with Nature, are welcome.", says Miriam Maes.

The Summer Solstice celebration started with the singing of Mantra's for Peace, in the garden. Afterwards the company wend into the adjacent garden for the ritual. The 150 people joined in a great circle. The meditation was provided by the Hare Krishna and later on various personal items were blessed. The celebration ended with a friendly gathering with cake and wine that everyone had brought to share.

In the beginning of the week Miriam dropped of the remainder of the meal to Poverello.

"With our sincere thanks for receiving the goods"
from Sister Anny

In Ostend, they serve about 70 meals a day for underprivileged, people living on benefit, unemployed and living alone.
Poverello is always looking for volunteers. If you wish to assist, you can read more on the Poverello Community page.

First and foremost to all our invitees. Without you all, it would not have been such a pleasant gathering.
To Eric Cornand, for his live performance and specially composed purely instrumental song "Waterfall of Avalon", during the burning of wishes.
To the representatives of the Hara Krishna, for the meditation.
To Luna of Fehluna for the mantra's for Peace in preparation for the ritual.
And last, but not least high priest Donegal of the Donegal Coven and high priestess Clarissa of the Coven of Amarylis for the cooperation in the ritual.